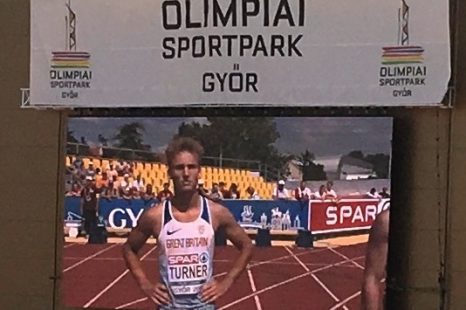 The decathlon got underway with and Jack Turner of Exeter Harriers coached by Kevin Skinner in action for the British team. The European U18 Championships in Olympic Sport Park Gyor Hungary attracted 1135 athletes from 50 countries including large number of Authored Neutral Athletes

It started perfectly as Jack took advantage of a strong tailwind throughout the 100m heats to run a personal best of 11.17 (+3.4) in the fourth heat, taking 823 points.

In the final event of the first session he returned to the field for the shot put (5kg). Turner once again produced a lifetime best, this time an effort of 13.05m, which was a remarkable improvement by 48cm. This moved him to tenth position after three events on 2304 points, 134 points off the podium places at the moment.

Next was high jump and with slightly below par 1.94m jump he was a bit down but Turner returned to clock a fourth PB out of five in the 400m, his time 50.67 leaving  the Exeter athlete just 91 points off the podium places. Jack Turner completed the first day of the decathlon in sixth (3837 points) Now upgraded to 5th

Turner started his 2nd day with his fifth personal best out of six, clocking a 14.07 over the 110m hurdles (91cm) which moved him up to fifth in the overall standings, just 125 points outside the bronze medal position..

He re-emerged for the discus (1.5kg) with his best attempt  in round two with a mark of 39.74m leaving him very disappointed being some 5 metres off his normal throw

During the pole vault his least favourite event , Turner achieved his sixth personal best out of eight events, clearing 3.70m under pressure on his third and final attempt.  Later in the javelin (500g), Turner earned another career best of 52.22m, pulling it out of the bag in the opening round.

The final event at 8.45 pm was the 1500m and although well outside his best He crossed the line in 4:46.55 for 640 points It was the end of a very long two days for the athlete completed the decathlon with a huge lifetime best points total finishing in 6th place overall with a UK all time U18 score of 7258 more than 200 points more than any Britain has scored before and only 450 points behind the world lead ANA athlete from Russia