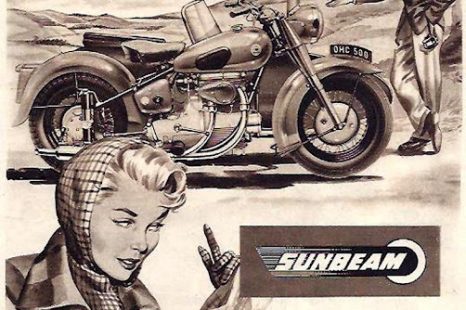 The Sunbeam S7  is being fettled having failed to make it to last years Revival having been laid low by a broken kick start & and faulty voltage regulator. Now sporting a new phosphor bronze starter quadrant and  solid state regulator all seems to be well!

The Sunbeam S7 is British motorcycles designed by Erling Poppe with styling loosely based on the BMW R75 designs that were acquired as war reparations by BSA who acquired full rights to the Sunbeam brand in 1943). Built in Redditch, the unusual engine layout was similar to that of a car. The engine was a longitudinally mounted inline vertical OHC 500 cc twin based on an experimental 1932 BSA design (the Line-Ahead-Twin – LAT) with coil ignition and wet sump lubrication which, though a dry clutch, drove a shaft drive to the rear wheel. The inline engine made this technologically feasible—horizontally-opposed (“flat”) twin engines on BMW motorcycles had already used shaft drives.