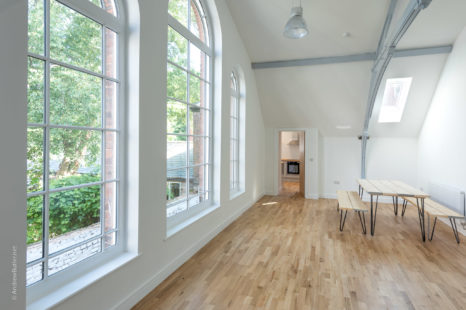 Previously ‘Stage Studios’, home to a successful Exeter stage school that has relocated, the large building has had many uses over the years, including a church hall, warehouse and a storage shed. It has been revitalised into two six-bedroom apartments suitable for young professionals or students.

This stunning refurbishment began in November 2017 and was completed in July 2018, ready for the September intake of students.

Turner Locker have had a long history with this building.

Some 20 years ago plus we went to look at it when it was known as the Burdett Warehouse and as operated as clothing warehouse a far cry from its beginnings as Sunday School next to the Baptist church dating from the 1820’s. By this point a mezzanine floor had been installed in the former main hall.

Our buyer 20yrs ago was Stage by Stage a performing arts school who eventually outgrew the premises coming back to us 20 yrs. later to re-sell the property.

Having sold it gain the premises have entered another phase now as high quality student accommodation.

Max Sayers from LS Properties says that as soon as he saw the property he thought it was a ‘brilliant space’ with bags of potential. He adds that part of the plan was always to retain the original features of the historic building, and this is evident from the quirky feel of the rooms.

As well as the bedrooms, each apartment has two bathrooms, a large communal lounge and good-sized kitchen. The two lounges are key features of the properties, each offering an impressive space for socialising and relaxing.

The property has been refurbished to a high standard throughout, offering superior accommodation to young people studying or working in Exeter.