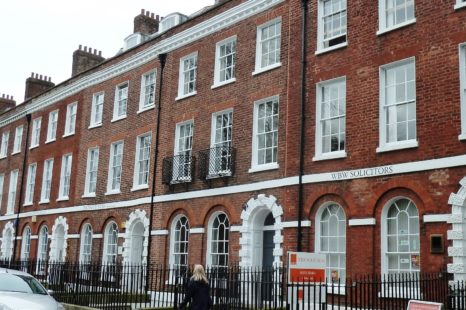 Acting for a private client we have sold the freehold of 8 Southernhay West formerly the offices of surveyors Smiths Gore prior to the takeover by Savills. Totalling circa 2600 sq ft over the floors the building has been modified and adapted since it was built at the end of the C18th. The guide price £500,000.

The sale ran in parallel with the grant of an FRI lease of the whole building to firm of Chartered independent financial advisers.https://www.foresight-ltd.co.uk/ who are expanding and relocating from the present premises just off Southernhay East.

No8 is one of a terrace Grade II* listed late 18th century red-brick townhouses built in the 1790s by their architect, Matthew Nosworthy. Nosworthy originally built four terraces in Southernhay West with a total of 42 houses.  Today only two of the terraces at Southernhay West remain, one comprising 10 houses and other 12 and, as architecture, they are exceptionally attractive.

Nosworthy was given the opportunity to create a series of housing schemes in Southernhay  to cater for the increase in wealthy professionals and members of the gentry who settled in Exeter during the last quarter of the 18th century. The idea behind the Georgian expansion into Southernhay was always one of gentility, light and space, and a quiet sort of power which drew upon the prosperity of the people who would take up residence there.

first of Nosworthy’s four terraces, Nos. 1-10. He was very fortunate in being able to use the locally made bricks which were fired in Exeter from the deep red clay which is such a characteristic feature of the fields of Devon. The townhouses weren’t all constructed at the same time. Nosworthy, was a speculative builder  and the land on which the terraces were constructed belonged to the Dukes of Bedford and it appears that Nosworthy took the almost-contemporary terraces at Bedford Square in Bloomsbury, London as his inspiration. Because each house was built individually there are subtle differences in all of them, despite the fact that as a whole they look like a uniform group. Sometimes one window is slightly higher than another, or a different batch of bricks were used resulting in a surprising variety in the colour of each house

Each facade is three windows wide and on the ground floor the windows are set into arched openings. Each arched entrance is characterised with vermicuated Coadestone surrounds. The keystone above each entrance is in the form of a moulded sculptural head, also in Coadestone a sort of durable ceramic created by Eleanor Coade at the end of the 18th century proving to be immensely popular and was used on many Georgian houses in England from the late-18th century until the 1840s.