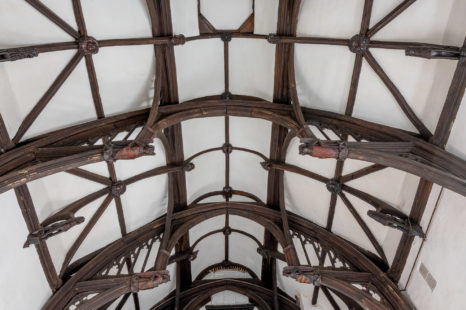 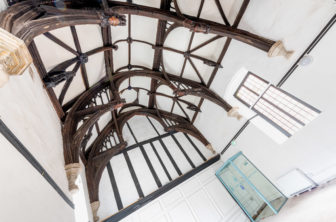 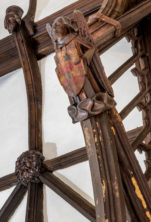 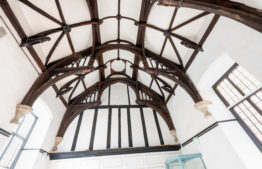 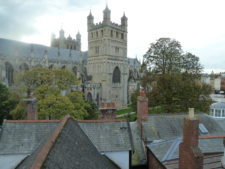 It’s unlikely that many people in Exeter are even aware of its existence, but hidden behind Cathedral Close is Notories one of the most remarkable medieval sights in the southwest of England: the 15th century roof of the Law Library is almost a miniature of the great hammer beam roof at Westminster Hall in London. To find such a thing in Exeter is remarkable.

Dendrochronology returned a felling date for the oak trees used in its construction as being between 1417 and 1442. It was probably built c1425 during the first years of the reign of Henry VI. Measuring 32ft long with a span of 22ft 9ins and 30ft high, four great arch-braced trusses divide the roof into three bays. The eight horizontal hammer beams terminate in carved angels. The two angels at each end of the roof carry books and are turned slightly inwards, the others clutch shields painted with heraldic devices. The angels aren’t merely decorative additions as each hammer beam was carved from a single piece of wood.

The hall is a Grade I listed structure and a Scheduled Ancient Monument of national importance. It is described in a recent archaeological report as “one of the outstanding structures of its kind in the country”, and hopefully it will now receive the wider attention that it so fully deserves.