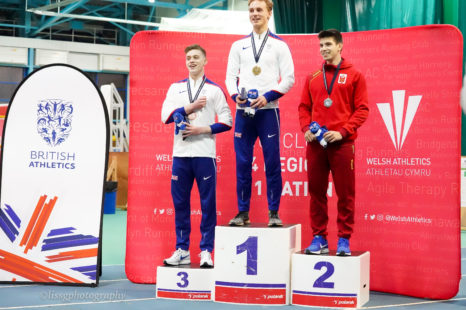 JACK Turner has vowed to keep improving after claiming his biggest success to date, a gold medal at the Under-20 Indoor Combined Events in Cardiff.  the Wellington School Sixth Former, aged 17, competed in the Heptathlon (seven events over two days) and achieved lifetime bests in 60m sprint (7.17s), long jump (7.06m), shot (12.58m), 60m hurdles (8.05s), pole vault (4.15m) and an equal PB in the final event, the 1000m.  His score of 5,430 points gave him his first GB gold medal, ahead of athletes from Spain, France, Poland and the Czech Republic.

he trains five days a week, for up to 12 hours a day – in the gym at Wellington School, in Exeter and in Cardiff with Francis Baker.

Baker is an ex-GB international himself, and has focused on improving Turner’s pole vault performance.

Turner’s other coach, Kevin Skinner, has been with him from the start, offering vital guidance and encouragement to reach this point.

Turner is grateful for the support of Wellington School, too, as he explains: “They’ve been really helpful, especially with strength and conditioning in the gym.